We went over to Oxfordshire today, which wasn’t actually that far, to Blenheim Palace. This is a World Heritage Site because of it’s importance in terms of why it was built, it’s gardens and as it is the birthplace of Sir Winston Churchill.

The money for the Palace and the Dukedom of Marlborough was given to John Churchill after the beating of the French at the Battle of Blenheim. The gardens and parkland was landscaped by ‘Capability’ Brown, and Winston Churchill was born there, two months early, when his parents were visiting. Randolph Churchill (Winston’s father) was the son of the 7th Duke (but not the eldest so didn’t inherit the title).

The visit included two tours around the house. The first we took was an audio/visual tour which followed the first Duchess (Sarah)’s maid who introduced the story of how the palace was built and a number of other stories. This lasted around 40 minutes. The second tour was a more traditional tour around the state rooms, which was nonetheless still enjoyable and it pointed out a number of things we would have missed otherwise.

We spent the rest of our time in the garden and parkland.

The nearby town of Bladen is the resting place of Sir Winston and Lady Churchill. 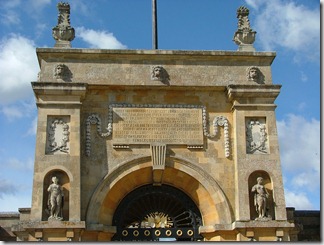 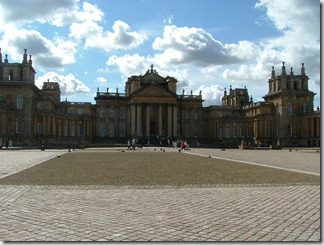