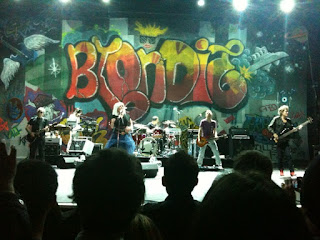 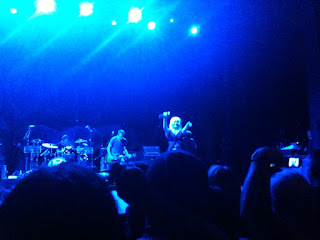 Can’t remember how many times I’ve been to see Blondie now but last night was easily the best. Fantastic venue (Manchester Apollo) created a great atmosphere. Sell-out 3500 people made a heck of a racket and really enjoyed it. Good support, Little Fish, new band from Oxford (www.littlefishmusic.com)

The band were great. Original members Debbie Harry, Chris Stein and Clem Burke (he’s got to be one of the best drummers in the world) together with Leigh Foxx (bass, been with them since they reformed in 1998), new keyboard player Matt Katz-Bohen who was fantastic and fitted the music of the band very well (very snazzy all-white suit and sunglasses BTW!) and a new guitarist who was amazing, though can’t find his name anywhere!

There were a smattering of the hits in the set (Hanging on the Telephone, Atomic, Heart of Glass, One Way or Another, Maria, Call Me, Rapture, The Tide is High (a really rock version they do live!)) together with a number of album tracks from the seventies and eighties (The Hardest Part from the Eat to the Beat album, Orchid Club from The Hunter album) which are great to hear live for the first time and doing these lesser known tracks is something Blondie often do in their concerts. There were a few tracks from Debbie’s solo album from last year Necessary Evil (Two Times Blue, You’re too Hot, Whiteout – which was fantastic) and the arrangements of those with Blondie were ace.

As usual with bands they bring out some new songs and Blondie were no exception. Panic of Girls is hopefully coming out soon (but a comment Debbie made suggested they were having a few problems with it!) and often you kind of enjoy the tracks but they grow on you when you get the album – the 5-6 tracks Blondie played were amazing. Seriously can’t wait for the album, it’s going to be brilliant.

Definitely played more than I’ve put above, they were on for around and hour and a half solid. Can’t wait for the next time we get to see them in that sort of atmosphere. Blondie are remembered as a seventies/eighties pop band, but they are an America Punk Rock band, and certainly play like that live!

Slideshow of all photos when littl bruv emails them to me (my iPhone still poorly . . .)