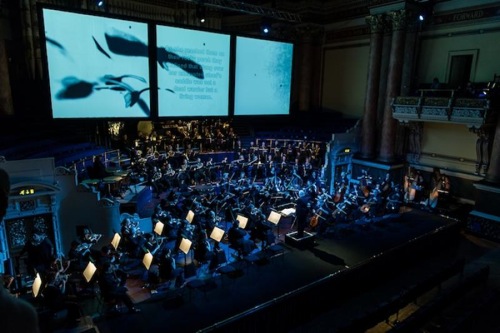 We had been waiting a year with great anticipation since the first of the Ring Cycle operas, Das Rheingold, last year at Leeds Town Hall. The success of last year’s ‘preliminary evening’ to the three main operas, as Richard Mantle the Director General of Opera North put it, was a success in ways they’d not even dreamt of.

The staging again was the full Wagnerian orchestra of over 100, with all-sorts of interesting instruments such as a bass trumpet and Wagnerian horns covered the entire stage and steps in the Town Hall, and three giant screens with projected words, narration and images to go along with the story.

The idea of the Ring Cycle with outrageous costumes, horns on helmets and very large ladies wearing Bodecea type dresses are eliminated in these productions and full concentration can be put on the music and relationship between characters, and absolutely enhances the opera.

Before the performance, Richard Mantle came onto the stage to inform the audience that Annalena Persson who was to sing Brünhilde had been suffering from a throat infection all week and that morning it had become worse and so she could not perform. So, they had flown the American soprano Kelly Cae Hogan was is currently performing in Beethoven’s Fidelio in Germany over to take over. Now Brünhilde is a pretty major character as Die Walküre translates as The Valkyrie, singular, as the nine Valkyrie sisters are in the story but it all hangs on Brünhilde’s relationship with her father Wotan.

How she managed to fly over and put in a performance like she did was stunning, the very long scenes with Wotan were terrific and looked like they’d been rehearsing for weeks!

The plot of Die Walküre is summarised here from Opera North’s web site:

Béla Perencz as Wotan and Katarina Karnéus as his wife Fricka – you wouldn’t want a wife like her!!

Wotan is king of the gods, law-maker and father of nine warrior daughters (Valkyries) with the goddess of the Earth, Erda. He tries to break the curse of the Ring of power by fathering a pure-of-heart hero by a mortal woman. But when the lives of Wotan’s mortal off-spring are threatened, his plans to protect them are thwarted and his favourite daughter defies his will. Though Wotan still loves her dearly, he is forced to punish her severely.

The orchestral sound of this opera is stunning, ranging from the famous Ride of the Valkyries, to beautiful soft melodic passages which often Wagner is forgotten for now-a-days and Die Walküre includes the very famous aria sung by Siegmund in the first act. The orchestra and Musical Director of Opera North Richard Farnes actually received the biggest cheer of the evening. Their playing and accompaniment to the drama was outstanding.

It’s certain that the anticipation in the full Town Hall was well-rewarded after five hours of totally engaging opera. And I’m pretty certain those there cannot wait until the third instalment of this incredible work, Siegfried, next year.

First review through at the time of writing, a well-deserved 5 stars!!

This is an interview with Musical Director Richard Farnes, click to listen:

This is a video teaser from Opera North: