Giulio Cesare is our first Handel opera we’ve seen, and it won’t be our last. This review could be very short; Handel is brilliant!! 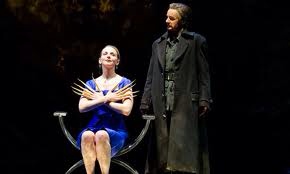 The synopsis courtesy of Opera North goes as follows:

Egypt, ancient times. Cleopatra uses all her considerable wiles to persuade Caesar to join her in an alliance against her brutish brother Ptolemy, with whom she rules the country. Plots and counter-plots ensue before Caesar and Cleopatra emerge finally triumphant in both love and war. 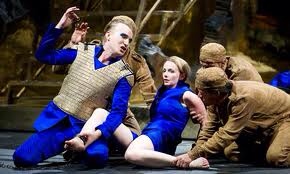 The production wasn’t set in the traditional setting, in fact it really wasn’t set in any particular time period. Costumes were a mixture of contemporary and just made up. The set was stunning. It started off as a truncated pyramid with a gantry on the top and in a pretty drab state, this was where Caesar (played in the usual baroque-style female alto) was reflecting on his recent victory. Throughout the opera, the set rotated and a separate gantry added to form Ptolemy’s palace, a battlefield and outdoor garden with water. The lighting altered it between the drabness and an amazing gold. This has to be the most clever setting we’ve seen.

The music was a small chamber orchestra with the harpsichord was very balanced throughout a demanding score, and the amazing music flowed perfectly throughout. The singing was great, and a couple of make altos was something we’re not used to in operas at Leeds so that was a nice change. The highlight in the singing was Sarah Tynan who played Cleopatra. She had the majority of arias and they were absolutely enchanting. Baroque arias have much more decoration in them which were beautifully sung and in quiet sections, a pin could be heard drop in the theatre.

Apparently the original runs for about four hours and it had been shortened to about three. We’d have been more than happy with the extra hour!!