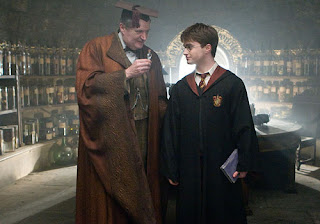 Went to see this on Thursday evening at the Cineworld in Castleford. We chose the VIP seats for a change which were excellent!! Definitely use those again. Nice chairs, loads of legroom and separate sound system.
The film was obviously a carry-on from the previous ones – some of the characters took a while to click like the death eaters and members of the order of the phoenix, perhaps a little reminder for non-Potter fans like me would have been useful. Though I suppose that would have made the film even longer than the 2 and a half hours than it was already.
The film was dark and moody in places, and was really a linkage movie to the final two which would have the showdown between Potter and the dark lord (I assume, I’ve not read the books!)
The greatest delight of this film is the presence of the wonderful Jim Broadbent. I had no idea he was starring as Professor Horace Slughorn. This character is central to the movie and Broadbent’s acting was terrific all the way through. I hope he’s in the final two!
Definitely would recommend a trip to see the film. Not the best, not as much action, but still enjoyable in terms of character and story development.