A Sunday afternoon treat today with a double-bill of operas. Both of these I’d never listened to or seen so they were a bit of a mystery. 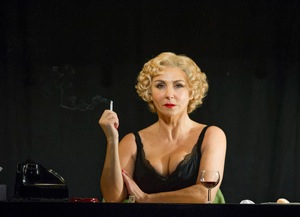 La Voix Humaine by Poulenc was first performed in 1959 and is a 40 minute ‘tragedy lyrique’ for a single voice. Lesley Garrett returned to Opera North, a Company she was part of in their early days, to perform Elle. The synopsis from the Opera North web site:

A woman is sprawled alone on her bed. ‘It looks like the scene of a murder’ said Jean Cocteau, who wrote the play on which Poulenc’s opera is based.  But the woman isn’t dead.  She gets up and makes to leave, when the phone rings. It is her ex-lover. During the next 40 minutes we hear one side of an increasingly desperate conversation in which the woman tries anything to win him back.  But it’s no use – she can’t get through to him. He hangs up, and she’s left whispering ‘Je t’aime’ to nobody.

La voix humaine is short in length, but not on emotional impact. Through the lone voice of the woman, Poulenc expresses all the pain and fear of rejection in the rawest fashion, whilst enveloping her voice in music of caressing warmth and sensuality.

Aletta Collins returns to Opera North to direct this one woman show, which will showcase Lesley Garrett’s talent in this heartbreaking portrayal of a relationship’s breakdown. 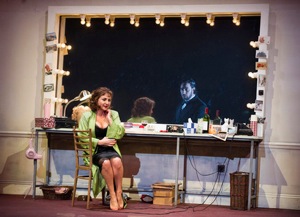 We weren’t that sure that we would enjoy this opera and really went to it as the Purcell was coming next, but actually for me it was the highlight of the evening. Lesley Garrett’s performance was incredible. She acted and part wonderfully well and kept the one-sided conversation alive and moving forwards with great pace. He voice terrifically matched the range of the music and the emotion required. He acting was excellent and even though the character should be younger, I think her maturity enhanced the part and brought more emotion than a younger actress could have done. I would definitely go to see her in this again.

Elle is clearly an actress as the set is a dressing room, the mirror frequently fades into a scene which is being alluded to on the phone. Very dramatic, and at the end she disappears and appears at the other sides of the mirror. 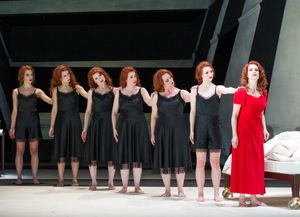 Moving back in time a few hundred years with continued with the hour long Dido and Aeneas. It must be said that even though this was in English, I did struggle to work out what was going on. So, thankfully a synopsis from Opera North assists me:

Aeneas, a Trojan prince who has escaped the devastation of his city at the hands of the Greeks, lands in Carthage where Dido is queen. She falls deeply in love with him, but evil forces are at work, bent on her destruction. Aeneas is tricked into abandoning her, and overwhelmed with grief, she dies.
Purcell takes a universal epic and makes of it an intimate human drama, packing a magnificently rich variety of music into the work’s hour-long duration, much of it composed expressly to be danced. This concise masterpiece stood unchallenged as the finest English opera for more than three centuries and there is still no more powerfully moving expression of noble resignation in the face of death than Dido’s great lament ‘When I am laid in earth’.

In a way though this didn’t spoil things as the music was wonderful, as one would expect from Henry Purcell, period instruments were used in part of the orchestra, the chorus (seated under the stage) was superb and the lead (Pamela Helen Stephen) was superb. The setting included dancers who portrayed facsimiles of Dido and was really interesting, although some of the audience who had obviously had a coach trip to see Lesley Garrett found this amusing (can’t see how!!)

The opera passed quickly, and was good, but I couldn’t help thinking about the stunning performance we’d witnessed in La Voix Humaine earlier. Definitely an enjoyable, if and odd mix of operas for a Sunday afternoon.