What to do in the Cloud!!

Cloud storage is pretty much a necessity now-a-days. Back in the day (that makes me sound really old!), a single desktop PC held all your files, email, photos, videos etc. and should you need them away from your desk the trusty old USB pen was the solution. Things have moved on rather and with multiple machines, tablets and smartphones, accessing your files without needing multiple copies, and remembering what was needed to put on a USB pen, cloud storage is very much necessary.

Email in the cloud

Cloud storage really began with email as that was the first portable medium as most was pretty much text based and could be accessed on the simplest mobile phones. Gmail, Hotmail etc. brought in webmail but they were a bit basic but using POP on the email clients kept the storage in the cloud useful. Of course, in 2015 webmail clients are exceptional, and apart from integration into other apps on a device, they are not worth moving from.

Recently I’ve been very much in need of a reassessment into the cloud storage I use (options still open for email) and these are my musings and decisions on the subject. This is right for me, but any technology in my view is very much ‘horses for courses’ – what you need at the time.

My first cloud storage was Dropbox, and I kept it for a long time, expanding it to 100GB; more than enough for my storage needs. However I quickly found that, well, all that Dropbox did was store my files. I could use sync apps for all my devices to access the files and share them with other people, but that was about it.

I want to be able to store photos in the cloud – Dropbox didn’t allow me much in the way of organisation and with my BT broadband I got free access to Flickr pro. The storage on this was ridiculously big and it seemed to be the place to store and share photos. However there was one problem, the interface and how everything fitted together was so complicated and sharing was always difficult to find. Embedding the photos in a blog was fairly easy but the rest was a pain in the neck. BT moved away from Yahoo! and so my pro account went. Ho hum!

iCloud Drive: I use a number of different devices, mainly Apple, so the first choice was to look at the new iCloud Drive. This is pretty much cloud storage and from my experience of using iCloud with Pages, Keynote and Numbers, I have always found the speed and sync between devices excellent. iOS 8.3 and OSX 10.10.3 promise a new iCloud Photo Library which promises a much better way of managing photos, though it takes up your iCloud storage unlike the previous system which didn’t. So, the photos would have been fine but what about files. On further investigation into the files part I was impressed with the Mac integration, iCloud for Windows looks OK. So, I went to iPhone and iPad – rubbish! Although the Apple apps and select apps connect to iCloud Drive, there is no separate app and so browsing and sharing files from a mobile device is impossible.

Google: Non-starter for me, a Company who makes its profits (over 80%) from selling personal information and data is not for me. Will never trust Google with anything of mine.

OwnCloud: Up to now OwnCloud was my choice. Privacy is important to me (hence my dislike of Google) and with OwnCloud I could run my own personal cloud using an old netbook at home. This allowed file storage and sharing, photo albums and actually a lot of extra apps that could be added. Great to have my own private cloud. But . . . it relies on my internet connection which is OK for the most-part but annoying when I can’t access files because my son has knocked the router in the morning! Moving and using large files (multiple GB) is not great and in some cases has caused errors, possibly due to the speed of the server. I am limited to the 120GB on the netbook and with me wanting to use it more for media this was going to be limited. Yes, I could use a quicker computer with a much bigger drive in, but that costs more, with less security (I am using SSL but it’s a basic certificate) and backup, than an external system.

Microsoft OneDrive: Over the years I’ve had a mixed relationship with Microsoft. I liked them when Windows 7 came out and also had one of the first Windows Phones. Then Steve Ballmer’s Microsoft completely put me off with bloated software, confused services and the Windows Phone strategy not coming up to expectation. I would have been completely happy without Microsoft in any ecosystem I worked in.

However over the past months (new CEO effect?) I have become more and more impressed with the service Microsoft deliver. The Office365 strategy for home is great – £7.99 for 5 Office installation plus tablets and phones per month is superb – and 1TB of OneDrive storage per user. I get Office from my workplace so that option isn’t great for me (otherwise it would be), but £1.99 a month for an extra 100GB is good.

The other aspects to OneDrive I like are the web interface and apps which are both asthetically pleasing and provide much more than just file storage. Uploading huge files, and a lot of them, is absolutely no problem though a modern web browser (I tested in Firefox and Safari). 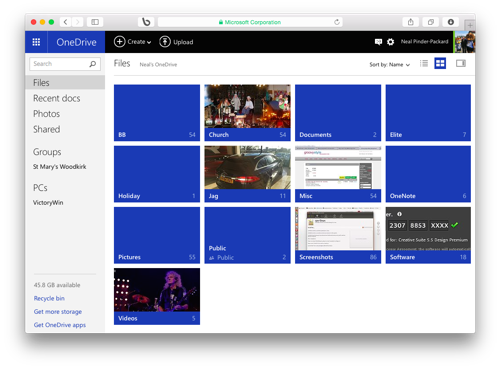 Pictures are excellent, look good, can be arranged in albums and can be shared to family and friends extremely easily. Users then get a very easy to use and good looking album. 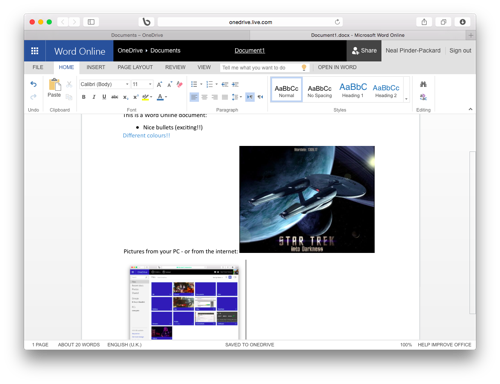 Documents can be edited from OneDrive using the excellent online apps without even leaving the web browser. These are continuously being updated and more importantly, are fast! They’re not as good as the Apple ones yet, but still, for basic editing they’re OK. Files can be opened into full Word and be constantly synced to the cloud while they’re there (this includes the Office for Mac versions). Videos can be airplayed through the iOS app to my Apple TV perfectly. Nice!

The apps provide much the same useful features. They also link into the iOS versions of Office for simple editing: 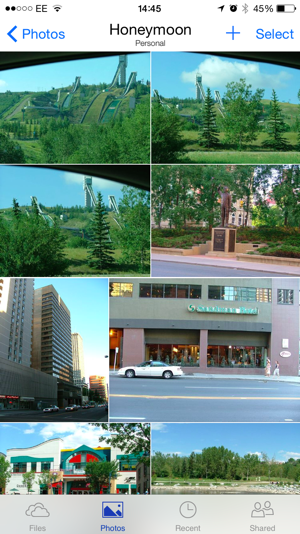 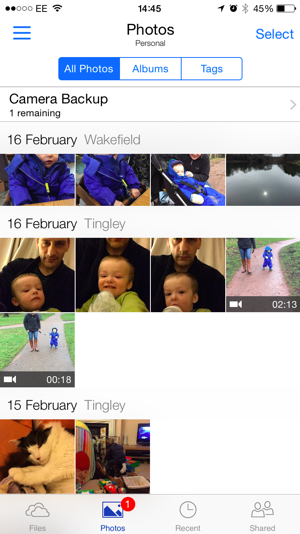