Home » Slider » Murder on the Nile

Murder on the Nile 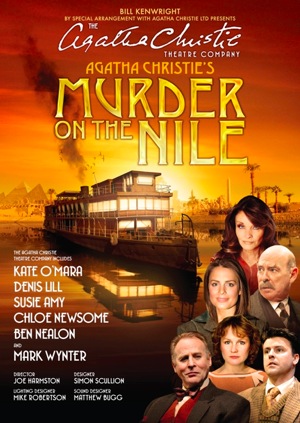 ast night we went to our annual production by the Agatha Christie Theatre Company, “Murder on the Nile”. Dame Agatha wrote the scripts for her plays and often altered books to suit the stage, often with subtle changes to the plot. “Murder on the Nile” is obviously a version of the famous Poirot novel “Death on the Nile”. The first notable alteration is that Poirot isn’t in the stage play! The detective role is taken by Canon Pennyfather; guardian of the rich Kaye Mostyn (nee Ridgeway) and is a replacement for Kaye’s trustee Andrew Pennington.

SPOILER ALERT – don’t read on if you’ve not read the book, seen the screen adaptations, seen this play – or don’t really mind knowing who did it!!

The scene is the outer deck of the cruise, and much of the starting part of the play is directly from the novel. The summary of who the characters are, and the plot is done is an amusing way with the excellent Kate O’Mara playing the eccentric ‘snob’ Helen ffoliot-ffoulkes (note the small letters!) nosing into the guest list and she in a small way takes on the role of writer Salome Otterbourne from the novel, in that sees something of the murderer at night and has her shawl stolen which Simon uses to silence the second shot which actually injures him. The Lord masking as socialist is now Mr Smith, but Dr Bessner the Austrian physician is in the same role.

Obviously all the action is on the boat so none of the run-up to the trip, or day-trip action. The actual murders took place in the identical way as in the book but with a major difference. In the book, Jacqui and Simon plot the whole thing from scratch. The idea being that Simon marries the rich Kaye, she dies with both of them having alibis (Simon having been ‘shot’ by Jacqui and Jacqui being constantly under watch in ‘hysterics’). In the play Simon does fall for Kaye, not just a show, and Jacqui does follow the honeymooning couple to get under their skin. Jacqui realises that Simon is possibly planning to kill Kaye for her money, Jacqui takes on a role of protector and shoots Marie the maid who tries to blackmail Simon. 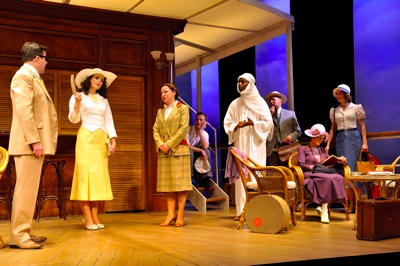 I’d imagine the plot changes made it fit the stage better, but the ending didn’t really affect it and it is interesting to wonder why Dame Agatha did alter it, might read her autobiography and find out! When Canon Pennyfather eventually works it all out Jacqui is caught between killing herself or Canon Pennyfather. In the novel, of course, it a massive plan which goes wrong so she kills Simon and then herself. In the play, the curtain falls with her undecided, it is up to the audience to decide what happens!

The production was excellent, the sound effects and staging made it top quality. The cast were excellent, but the only negative was the audience size, which was pathetic! It is upsetting that such popular and entertaining plays are currently very out of vogue, the price was pretty cheap as well. It seems The Mousetrap in the autumn and spring has been selling very well, but let’s face it, there’s a heck of reputation world-wide about that play!

As a huge Christie fan, I right enjoyed it!!