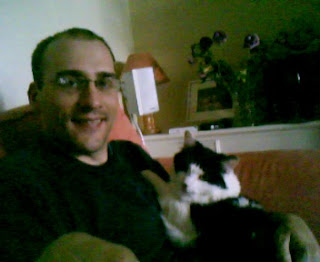 This is Nelson, one of our cats. He’s 4 in September 2009. We rescued him and his sister (Emma) from the back of my school when they were only 3 weeks old. A colleague weened them and we have had them since. We actually took them in on the weekend of the 200th anniversary of the Battle of Trafalgar. Nelson after Lord Admiral and Emma after Lady Emma Hamilton.

Nelson has spent the vast majority of the afternoon having a cuddle! I think being at work all day means that when at home, he demands attention!