Home » Theatre » Opera North: From the House of the Dead

Opera North: From the House of the Dead 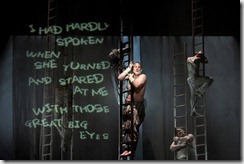 A title which does not particularly seem that cheerful! Well ironically there is a sort of happy ending! The opera, the last by Leoš Janáček (1854-1928) hangs loosely around a political prisoner Goryanshikov being sent to a Siberian prison in which the rest of the opera is set, and he goes free at the end. The opera is really a set of stories being told by various inmates. These stories are told with unbelievably lyrical and dramatic music by Janáček. It must be very difficult to play and the biggest applause of the evening was for the orchestra, directed by the Musical Director of Opera North Richard Farnes (a truly world-class conductor).

The lead characters, all men apart from a lady playing the boy Alyeya, had to be very strong singers, and actors to portray the stories.

The set was excellent, providing a very dark view of the prison. An innovative idea was that in the set for each story was a canvas/wall to project words from the story like graffiti. It worked surprisingly well, and was a unique feature.

The opera is definitely not one for those new to the genre, but I have never been drawn in so much to a production with the incredible music. As this is late 1920’s the development of wonderful chord progressions and use of the orchestra was at it’s height, and helped Janáček to portray the stories.

To quote Kobbé’s Opera Book, “Perhaps no other composer than Janáček would have attempted to turn Dostoyevsky’s vast book into an opera. Certainly no one else could have compressed it into three acts of less than thirty minutes each, and still have preserved so magnificently the spirit of the original.”

We are so lucky to be close to Opera North to experience this type of unique opera, so wonderfully produced.