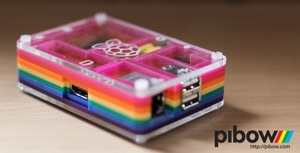 Just ordered a Pibow (http://www.pibow.com) – this is a wonderfully colourful case for the Raspberry Pi. Cases for the un-cased Raspberry Pi are not uncommon, there are loads on ebay. However this looks really good, and also gets a good write-up on the Raspberry Pi web site (http://www.raspberrypi.org/archives/1640). This case will go around the Pi I’ve set up as a print server initially. My second Pi which is on order now will probably get one as well.

The key advantage of this case in particular is that the top and bottom are clear, so the PCB can still be seen, and a cable leading from the GPIO can easily be fitted, which will be useful as I have plans for this with my second Pi. Very impressive!

The other nice thing is a chunk of the profits go to the Raspberry Pi foundation.