Rather a bizarre name for an app, but this certainly caught my interest. All the web sites I’m involved with use WordPress as their base. On the Mac I normally use MarsEdit which has been around for years. As I have previously blogged, finding a decent blog editor for the Mac was a nightmare after using the superb Windows Live Writer.

Unlike MarsEdit which can be used for a whole host of different blog platforms, Pixel Pumper is just for WordPress. After a simple login process the main screen (pictured) appears with the centre section for the post, and previous posts and categories listed. The top contains simple formating tools. I notice while typing this that the usual OSX spell checker is not activated, though it does come up with suggestions, oddly.
One of the big points the writers of Pixel Pumper make is that images are uploaded and deliverd in full retina quality. As I don’t have a retina screen on the Mac or iPad, and my iPhone 5 is a little small to make full comment on, I’ll have to wait a while to check on that. Above the category is a single image which is used as the Featured image – a much easier was of uploading that.
Adding images to a post isn’t that obvious (note, there are no instructions, which I assume is a comment about how easy it is to use) so I clicked on the Add Photos icon on the top, selected an image from Finder and in it popped below the text. Clicking on the image gave options of formatting. The size of the image, set per blog, is in the Settings menu.
Posts can be saved as Draft or scheduled for posting by clicking on the green calendar icon just underneath the title.
Overall this is a cracking little programme and it does virtually everything I normally would need to do on a blog post. The only thing missing as far as I can see is the option to edit the HTML, which is handy for adding Flickr streams, YouTube clips and a myriad of other additions to posts. I won’t be ditching MarsEdit at the moment, but as Pixel Pumper is currently free on the Mac App Store (https://itunes.apple.com/gb/app/pixelpumper/id595901917?mt=12) it’s certainly worth a try. 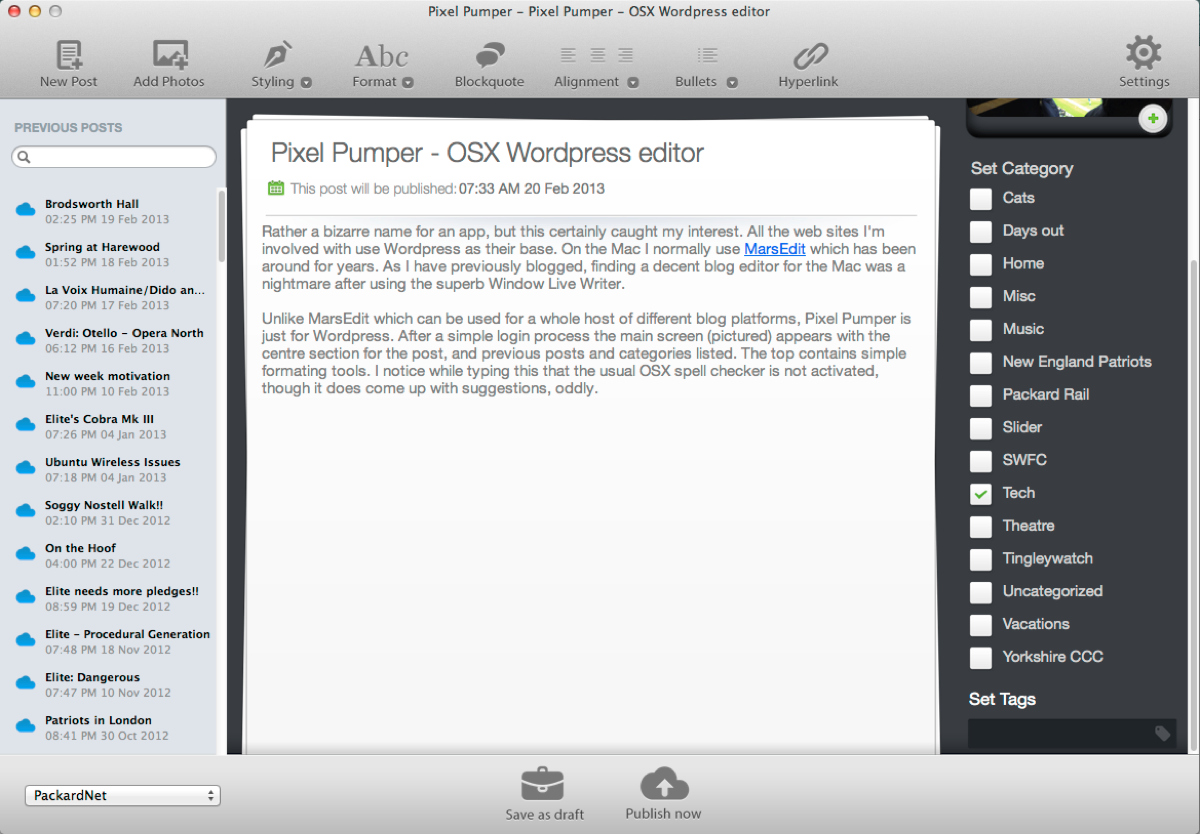