RISC OS on the Raspberry Pi

Since getting my second RasPi I’ve been eager to give the old Acorn operating system RISC OS a bash on it. Acorn’s processors (ARM) are of course now the most used chips in the world, all Apple iPads and iPhones as well as most other smart phones use ARM chips as they are low power requirements and don’t kick off a load of heat. The low-priced Raspberry Pi also has an ARM chip on and so some bright person has managed to port RISC OS onto an SD card image.

I’ve not used RISC OS for years, and it has been developed in a fairly modest way. When Acorn’s desktop computers were cancelled in 1997, RISC OS was a really good competitor for Windows (not sure about Mac OS) and with the same development still could be (though really it is easy behind the latest versions of OSX, Windows and Linux now). It is really very fast, much faster than Linux alternatives for the RasPi, and looks good. There are a few issues I ran across, some because the image is still in a Alpha state, but others because of RISC OS itself:

So, I’ll continue to mess with the images as they are released, but to be a competitor for the RaspPi, they need to get a browser sorted, and make sure the common programming languages are installed and easy to use – a port of Scratch would be nice as well!! 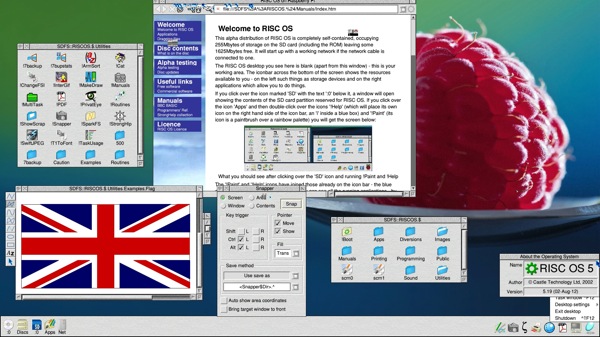