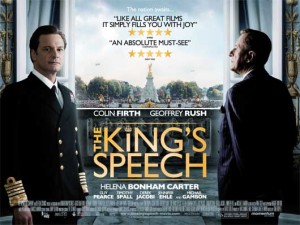 On Wednesday evening we went to Cineworld in Castleford to watch the well reviewed The King’s Speech. Sometimes when a film is in the media a lot it turns out to be quite a disappointment. This though is not!

The cinema was sold out and afterwards there were many comments around about how brilliant the film was. Colin Firth was unbelievable as King George VI. The relationship between him and the unorthodox Australian speech therapist Lionel Logue (Geoffrey Rush) was superb, and apparently partly based on diaries of Logue recently found.

The film starts with the Duke of York (Firth) speaking to a packed Wembley Stadium, and having great trouble in doing so. The Duchess, the future Queen Elizabeth (Helena Bonham Carter) finds Logue in an odd office in Harley Street. The story moves through death of George V, rise and fall of Edward VIII, and the relationships in the family towards the outbreak of war.

The culmination of the film is the speech the King had to make on the day of the outbreak of war to the Empire. In our media rich world it is difficult to understand how incredibly important the live broadcast of a King was in such a circumstance, but the film portrays the nation’s atmosphere very movingly.

I could have easily sat and watched another 2 hours, can’t think of a film I’ve ever wanted to do that in. Genuinely funny at times, it was thoroughly enjoyable.