Last night was a treat – the national tour of The Sound of Music (web site) at the Bradford Alhambra. The cast included Connie Fisher who of course won the role on TV and the full Andrew Lloyd Webber production straight from the West End of London. The chap playing the Captain also played the guitar for Eidelweiss.
As can be expected, the cast was outstanding, the scenery very clever, basically switching between the hills and mountain (start scene and end), the Abbey and inside and out of the Von Trapp family house.
All the favourites of the film are in – with a cracking orchestra and a cracking volume! There are a couple of songs which are not in the film. 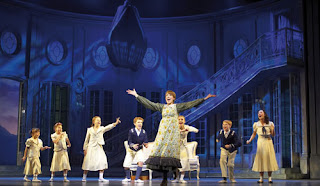 The amazing aspect of the production is of course the seven children. The musical numbers including them with Connie were the highlight of the show. They really are talented at such a young age. Thankfully they have three sets of children and they aren’t allowed to do consecutive shows.
It’s been a while since I saw the DVD film, but it really had to be right up there as the best musical of all time – total joy from start to finish!!! Worth the fact that it cost nearly double any other production there!!!
The audience makes a big difference on such an occasion – the Alhambra was absolutely packed to the rafters. And I’m convinced every single person had had as enjoyable a 2 and a half hours as we did . . . though every 2 minutes I expected Julie Andrew to come bobbing onto the stage . . .