Even though our camera box is not in use anymore, that’s not to say there isn’t any new life in the garden!

The front bird box on the Copper Beech (pictured) is the home of a Great Tit family, and though obviously we’ve not seen them, the chicks are very vocal!

The blue tit who was in the camera box but now in the terrace further along the garage, seems to be sitting on eggs. We have observed two blue tits taking it in turns to be in the box so we assume they are keeping eggs warm, and I’d imagine not long off hatching, if only they’d stayed in the camera box!!

Around the garden, we’ve seen dunnock and sparrow chicks, as well as lots of starlings. We don’t know where the dunnocks live but the sparrows are in a nest in the front on the house. 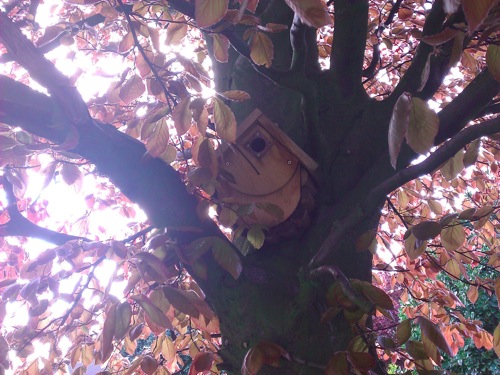