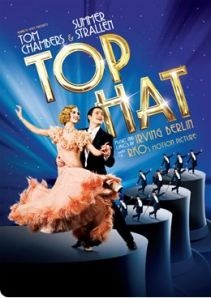 Not got much time for a big blog post but just had to mention the superb Top Hat musical we saw this evening. It is the first time the famous Fred and Ginger film has been presented on stage, and it is currently touring before going to the West End.

Starring was Tom Chambers, who won Strictly in 2008. His dancing was brilliant and the whole show was great. The dancing routines were in the 30s style with a big nod to the original routines but obviously had to be adapted for the smaller stage area rather than film studio. A couple of the characters were made larger roles, and funnier. It was a real treat, and from the reaction to it everybody in the audience thought so too!

Might have to dig the film out on a rainy afternoon now.