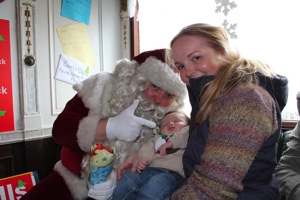 We booked to go to the National Railway Museum (http://www.nrm.org.uk) Santa’s Steam Adventure with Thomas. Even at 11 weeks old, we thought it was time to meet Father Christmas.

The museum was well adorned with Christmas Decorations and the bottom platform doubled as the place where all the mail gets sorted for North Yorkshire (North Yorkshire Pole!) and gets sent to Santa. Lots of parcels and toys were around and the children first had to help sort out the letters ready to go on the train. There were also opportunities for photos on Santa’s sleigh pulled by reindeer.

We then went outside and got on the Santa train, Teddy, which set off, with a little song, and waited with some games for Santa. Santa arrived and everybody went to him and received a pressie. Thomas naturally at this point fell asleep and missed the whole meeting Santa bit!

Afterwards, we had a tea and mince pie which we got in the price, and Uncle Ian played with the chiming monkey Santa gave to Thomas – he really liked it!!

Following then a good wander around the trains (which again Thomas really enjoyed) we went home.