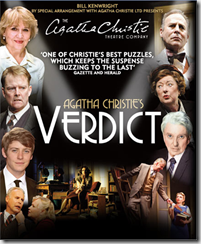 Verdict is not the typical Christie ‘whodunnit’ but more of a psychological study into the effects of a murder and the relationships between the characters. This is an aspect of Christie which goes through all her books and the root of all the solutions (though the clues are usually so entangled, and her mischievous way of putting one off the scent or up a blind alley confuse matter as well).

The cast included a number of actors who had been in previous Christie performances, with a couple of extra people to fill roles specific to this play.

The production was set in one room, just interspersed with period, typical Agatha Christie type music! It certainly set the atmosphere.

The story is pretty complex to summarise,  this is taken from a post of the Agatha Christie web site:

Professor Karl Hendryk’s wife Anya, to whom he is devoted, is gradually being ravaged by multiple sclerosis but thankfully she has her cousin Lisa to help care for her. When Karl is offered the chance of a life-saving treatment for Anya in exchange for tutoring Helen Rollander he agrees. However, Helen’s only interest in the professor is a romantic one and when he does not reciprocate her feelings she kills Anya and confesses to Karl. Karl is an idealistic man who will see bad in no-one and cannot tell the police what Helen has done, which leads to Lisa being tried for murder.

It does go a lot deeper than this, but you’ll have to see it to find out more!