On Sunday afternoon, the plan was to go to RSPB Blacktoft Sands, then up to Pickering where we were staying at The White Swan in the Market Place. Unfortunately the RSPB reserve wasn’t in the car’s satnav so we decided to put in Blacktoft – can’t be far away, surely. Well, it wasn’t, but at the wrong side of the estuary! It would have taken 45 minutes to get to the other other side so we gave up and decided to go straight to Pickering.

On the way we noticed a sign for North Cave Wetlands (http://www.northcavewetlands.co.uk/). A splendid little reserve, and a number of birds we’d not seen before which was a bonus.

We were staying at the excellent White Swan in Pickering. When we got there we had tea and the papers next to a log fire in the snug, and then a superb evening meal. Anne had scallops and me Whitby fishcakes and shrimp salad for starters. We both had an incredible pork belly with red cabbage and mustard mash with apple sauce. Never had so stunning pork belly ever, beautifully cooked, and very crispy crackling! For pud, I had a rhubarb crème brulee and Anne had a Lemon tart. Very good value. Brekkie was also excellent, the hotel tries to use local meat producers. 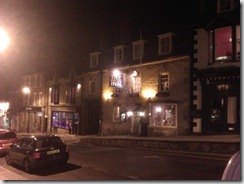 The plan on Monday was to go to RSPB Bempton Cliffs, then hopefully find RSPB Blacktoft Sands. The weather was incredible. Blue sky, and around 17 degrees in the shade. We’ve never seen better visibility down the coast. The gannets, guillemots and kittiwakes were in top form, as well as the smaller birds and skylarks.

We did get to Blacktoft Sands. The highlight being the Marsh Harriers putting on terrific displays. Also a black-headed gull having a go at a coot, and the coot jumping out of the water to have a go at the gull! We also had a cheeky little Robin on the picnic bench we were using to have lunch on. Presumably after a bit of bread!

Couldn’t have had a more perfect couple of days off!