We’ve just got back from a wonderful stay in London. The main reason for the trip was to listen to Anna Netrebko, the wonderful Russian soprano. She was leading a Gala at The Royal Albert Hall with her partner baritone Erwin Schrott and tenor Ramon Vargas.

We travelled down from Leeds via East Coast. Even though their rolling stock is getting old, the journey was good, and they offer complimentary food and drink to first class passengers which was a bonus we didn’t realise until we got on the train.

As we were aiming the trip (with my mum and dad) near the Albert Hall, we wanted a hotel nearby with . This was a challenge as all there seemed to be were boring chain hotels. However we found the Gallery Hotel (http://www.eeh.co.uk/hotel_gallery) , just 10 minutes walk from Albert Hall. If you look at the web site, this hotel really had character. The staff were friendly and helpful, and it was a good brekkie!

The gala concert at the Albert Hall was wonderful, the three star’s voices resonated wonderfully around the hall and to hear Anna’s amazing voice (let’s face it, she’s the best soprano to grace this Earth after Maria) was something I will long remember. This photo is from Anna’a blog after the event: 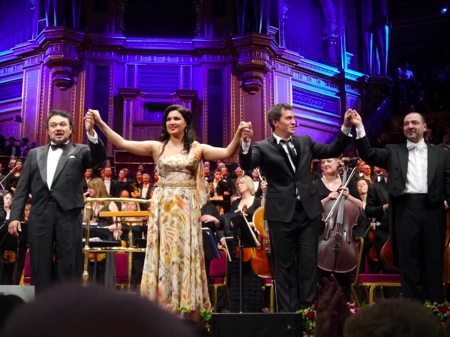 On Thursday, Anne and me decided to have a chilling trip to Kew Gardens. We love looking around gardens in the country, and had recently seen a David Attenborough programme filmed there. This was again a wonderful experience. The amazing architecture of the glasshouses needs to be seen to be believed, and the wonderful plants from all over the world kept us occupied for ages. Behind the palm greenhouse was a very large rose garden which they are redesigning with David Austin. The scent of all the different roses was wonderful and we got a number of ideas to add to the roses in our garden. On an ornithological note, we saw a green woodpecker on the floor, and two blue tit chicks, as well as a black cap later in the day we’d never seen before. Photos of this are on the slideshow later.

On Thursday evening, we booked to see Jersey Boys at the Prince Edward Theatre. This was as great as the awards and brilliant reviews. It’s not just a musical string together with their songs, but the warts ‘n’ all story of their career which lifts it above the average. The chap playing Frankie Valli (Ryan Molloy) who has played the role since it opened in London three years ago, certainly matched the unique voice of Frankie very well. 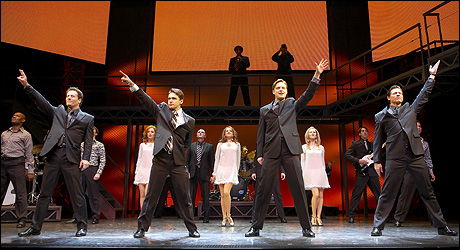 We travelled back on Friday. East Coast again performing well, even with a train that sounded like it was going to fall to pieces when it got up to speed!!