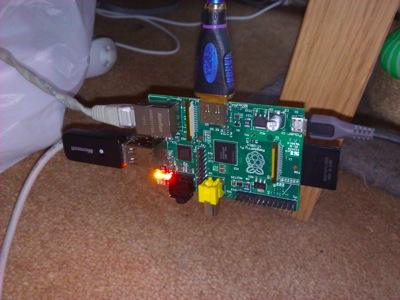 Spend a bit of time this evening deciding on future uses for the excellent Raspberry Pi. One use which has been mentioned in the internet is to use it as a very cheap and low power print server. This would require CUPS being set up on it, and VNC to remotely maintain the Pi. I’m using one Raspberry Pi for general playing around with (have ordered some more SD cards for various operating systems) but thought I’d use the Debian Wheezy beta to try the printer server. I currently use Windows Home Server 2011and used it for media service etc, however with the advent of iTunes Match, Dropbox/iCloud it’s basically being used as an overpowered print server and the place the 4k webcam in the bird box plugs into. I suppose when the bird box is use, it can go into the main PC (running Ubuntu 12.04) for the period if a bird is in there!

Before trying any of this, a major update of software already in the distro was needed using:

which was a bit of a guess but did actually work. Once all the installation had completed, the proof was to try running the admin which is a web page. This is done using:

Amazingly it worked, so the next task is to get VNC working so I tried:

Bit issue here, this didn’t work. It said it recognised the package but not to be installed. I assume this is an issue with Debian Wheezy as it’s a beta, though some Googling didn’t come up with what the package is now called. So, TightVNC seemed the next choice, and:

did work. Running TightVNC also did work, but this is where the success ended, the Raspberry Pi couldn’t be connected to using it’s ip address. So, this is the next challenge!!! 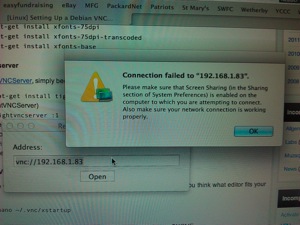