Went to the Grand Theatre in Leeds last night to see the Agatha Christie play Spider’s Web. The Agatha Christie Theatre Company has produced three of her plays recently, last year was the excellent And Then There Were None.
That and Spider’s Web attract a superb cast, very familiar as can be seen in the pictures.
Even though there is humour in much of Christie’s work, this play was funny due to the situation:
When Clarissa discovers a dead body in her home, she tries to dispose of it before her Foreign office diplomat husband returns with a government VIP guest in tow.
Equipped with an over active imagination, Clarissa finds real life murder too hard to handle! Having persuaded her houseguests to help her, it soon becomes apparent that the dead man was not unknown to everyone amongst them.
As the web of deceit starts to unravel, Clarissa pulls her friends into a desperate race to unveil the murderer and solve the mystery before the police discover the felony and arrest her as their prime suspect! 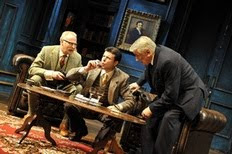 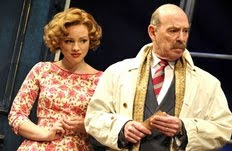 I thoroughly enjoyed the whole evening, as did the rest of the audience by the appreciation at the end of the play. Agatha Christie certainly wrote some cracking plays, the same Company are producing Witness for the Prosecution next year, which I am really looking forward to!
And no, I’m not going to say who did it!!!