Last night was a real treat. Never seen a Tchaikovsky opera live before and Opera North has been very bold this season in taking on The Queen of Spades. The scale in terms of production, cast and orchestra is huge and we were not disappointed!

The Queen of Spades is based on a story by Pushkin, and is well summarised here from the Opera North web site:

Herman is a man desperate for money. Constantly losing at the gambling table, he becomes obsessed when he hears of a secret which will grant him eternal wealth and the hand of Lisa, the woman he loves – the secret of the three cards. The secret is only known to Lisa’s guardian, an elderly Countess adored in her youth by some of Europe’s most eligible young men. But when fate deals against him, desire turns to compulsion. Gripped by madness, Herman gambles with love and with life, and loses at both. 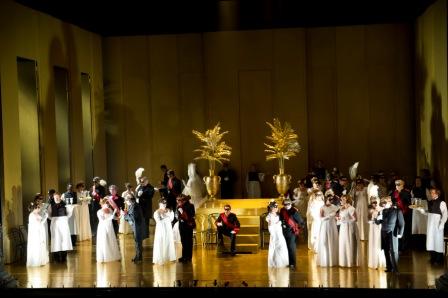 This opera is rare as a central character is an older lady. Many operas have characters on the fringe but the Countess (or ‘The Queen of Spades’) threads through the story and holds the key to Herman’s downfall. The Countess was played by Dame Josephine Barstow

and her portrayal was for me the highlight of the evening. Her characterisation of a slightly mad rich woman was superb and just before she dies (she does come back as a ghost in the next act to tell Herman the three cards to get rich) she sings a song from her youth, but it is done so quietly, with minimal orchestration, you could have heard a pin drop in the theatre. Wonderful!!

The design of the production was new, and although not lavish scenery, the grandness of the ball scenes was good and the subtle elements linking to the story were well done.

As usual the Orchestra of Opera North, conducted by Richard Farnes (Musical Director) was superb. The contrasts in texture at different points in the piece were excellent; from the soft strings to full-on orchestra and chorus sections which nearly blew the roof off in a wondrous Russian crescendo.