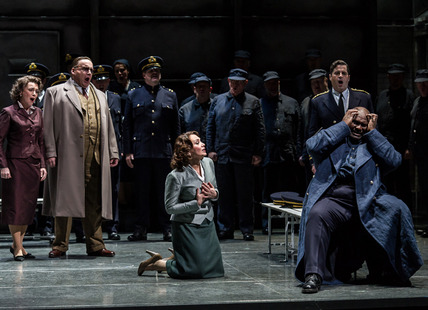 After a pretty long break since the autumn, we had the first of four operas in a week last Wednesday; a new production of Verdi’s Otello. Based on Shakepeare’s play (not unusual for Verdi) it was set in a naval base in the 40s-50s. The set really worked!

To summarise the plot, taken from the Opera North website:

Iago, an ensign in the Venetian army, is a man who bears a grudge. When his general, Otello, passes him over for promotion in favour of Cassio, Iago’s festering resentment quickly turns to downright malice. He poisons Otello’s mind with suspicion, and step by step, leads Otello to believe that his young wife Desdemona is in love with the young and handsome Cassio. And so Iago, a man consumed by envy, makes Otello into a monster of murderous jealousy.

Celebrating the 200th anniversary of the composer’s birth, this breathtaking new production brings Shakespeare’s great tragedy to life through Verdi’s most exquisite, passionate and profoundly moving music. A tale of betrayed friendship, suspicion and jealousy, it is widely regarded as the crowning glory of Italian opera.

I must confess that at the start I was a little concerned by the two main characters, Otello and his wife Desdemona. Their voices seemed a little weak, especially when the orchestra got going. This wasn’t a problem with the orchestra as other leads had no issue. It did turn out that Ronald Samm who played Otello had a stinking cold and that explains his performance – though his emotion and feeling came through so well it didn’t spoil itlater on when things were turning a bit nasty. Desdemona on the other hand is meant to be a young beauty with a gorgeous pure voice. The final act is incredibly famous, and I have been spoiled with listening to Anna Netrebko’s enchanting rendition on CD. Unfortunately this wasn’t up to this standard to make it a perfect performance of the work. However, overall, I enjoyed it.