It’s taken a while to get a review written of this since last Saturday, been rather a busy week!

Anyway, Das Rheingold is the ‘preliminary evening’ to the three much longer operas in the Ring Cycle. A bit like Tolkien’s Lord of the Rings, the Ring Cycle involves a golden ring which holds magical powers and different groups of mythical beings e.g. gods, giants and dwarves. 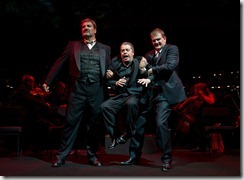 The opera was staged in Leeds Town Hall, a wonderful building with actually pretty good acoustics for this music. An enhanced Opera North orchestra of over 100 (7 harps!!) filled the hall with an amazing sound which ranged from the most delicate music to the most dramatic, as is the wonder of Wagner’s music.

To enhance the concert version, costumes, lighting and visuals were included.

Each group of characters wore a specific type of evening dress (after all it was a concert version!) The gods wore full black with Wotan the grandest in his black waistcoat. The dwarves in the underworld of Nieberlung who were definitely not grand in the story were open necked in lounge suits. The nymphs in the Rheine wore evening frocks with blue gloves to the elbow.

The lighting changed depending on the location and mood of the story.

The key part of the dramatisation was three massive screens with projectors on. They presented narration of the story and no more than textures of the scenery. For example a gentle river at the start and melting gold in the Nieberlung. 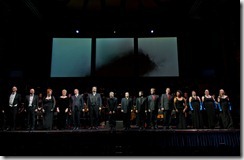 This was the first Wagner opera I’d been to and I, like the rest of the audience, loved it! Cheers and applause met the orchestra and cast. It was great to see the orchestra in full-flow instead of being in the Grand Theatre orchestra pit and again demonstrated how brilliant they are. Richard Farnes conducted, and I really have yet to see anything less than brilliant with him in charge.

Reviews in the papers this week have been superb – 5/5 in The Times, and well deserved. Even the misery-guts in the Telegraph gave it 4/5, didn’t like the projector screens . . .

The photos are from the Opera North Facebook page  and are of the production the evening I went (www.facebook.com/OperaNorth)